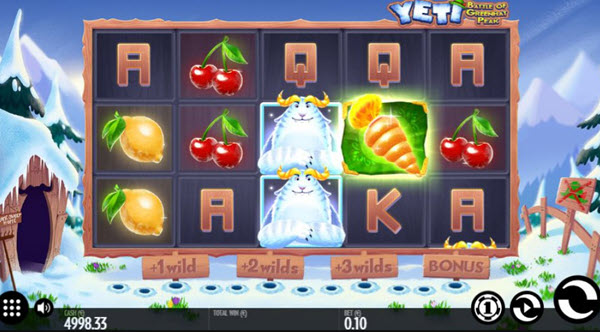 Do you want to play an amazing online slot game? This review of the Yeti Battle of Greenhat Peak Slot game by Thunderkick contains all the information you need to know about the game.

Right now, we're all waiting with bated breath as our favorite provider, Thunderkick, releases yet another production. We've loved reviewing games from this studio, and their latest seems like it could be amazing! The Falcon Huntress was an excellent example of high volatility gameplay combined well with gorgeous graphics to create one unforgettable experience that will leave you craving more.

Aside from that, Thunderkick really likes to blend in some low-volatility games from time to time, as seen with titles like Well of Wonders and Not Enough Kittens, which are both visually appealing. Nothing for serious slot players here, though.

Thunderkick has taken a risk by going against the grain and releasing Yeti Battle of Greenhat Peak, a winter-themed slot machine. The setup includes five reels with three rows at eleven paylines each for €0.10 – 100 bets per line, which gives it higher odds than traditional football slots or something involving beaches and palm trees during summertime!

The Yeti is a giant ape-like creature that usually harrases the poor farmers of the ice carrot in Greenhat Peak. They are little and peaceful Bavarian-looking people wearing Lederhosen and are being tossed around by this strange snowman-beast for no obvious reason, and you now have to stop him. Although we just coined that story, they might actually be the truth if you look close enough!

The game has eleven icons- four low-paying ones, four premium ones, two wild icons, plus a bonus icon. Wooden letters J, Q, K, and A are used to depict the low-paying icons, while cherries, watermelons, lemons, and Yetis are used to represent the premium icons. The most valuable symbols are the Yeti and the Wild, both of which pay out a 35-time win for five on a payline.

There are two wilds in this game, one of which is a standard wild while the other is a Frozen Wild symbol that only shows up in the game's Wild Attack function and a Bonus game. A frozen carrot is used as a scatter symbol.

There are two scatter symbols that will trigger the Wild Attack respin feature. When this occurs, any wild that does not appear on a payline that wins becomes sticky, and extra 1-3 new wild icons will appear as the reels continue spinning with their position locked in place or until they become part of a payout during your turn at bat!

The Free Spins Booster feature is triggered by collecting three, four, or five scatter symbols anywhere on the reels. The bonus round activates with 10, 15, or 20 free spins based on the number of scattered symbols found.

In the bonus round, every scatter icon that shows up on the reel set triggers one step on the game's Wild Attack gauge, and every three scatter icons trigger an additional random sticky wild, which will be there for the rest of the free spins as well as two additional spins.

A full meter awards five spins. The highest number of free spins provided in the bonus round is thirty-one. Any wild that lands on the reel set in the free spin session will be locked in place for the entirety of the session or until it becomes a part of a payline that wins.

To be fair, when you're a sucker for high-variance betting, it's difficult to provide unbiased assessments to low-variance slots. Thunderkick has done an excellent job yet again when it comes to production quality, so we have no issues there.

The reels spin at a reasonable speed, stop spins work correctly and have excellent graphics. Thunderkick has been giving us a lot of fantastic high-volatility slots of recent that they can be forgiven for releasing children's slot machines like this from time to time.

Even though this game is aimed at novices, it may be an excellent place to play a few rounds while attempting to win. Because the bonus is limited to an 845x maximum payout, which is low by today's standards, don't anticipate any spectacular payouts.

While the hard-hitting slotters are unlikely to be impressed, those who love small creatures will find themselves seduced by this diminutive Yeti.