Diamond Fiesta Slot is an online slot game that has Real Time Gaming as the software developer. It is made up of five by three wheels and fifty pay lines. It has a return to player of about 96%. 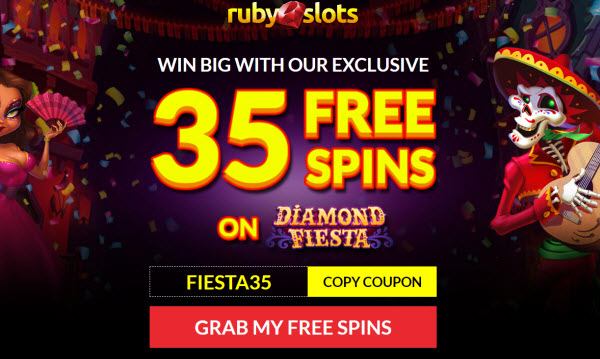 Real Time Gaming has developed a slot game that is made up of five by three wheels and fifty paylines. It is called Diamond Fiesta, and it follows the pattern of a previously released game known as Mariachi 5 by Real Time Gaming. Almost everything is the same, the designs, the colour, the soundtrack, and the pattern. The game is about the day for the dead people being celebrated in Mexico. The game is available at any United States of America online casinos that belong to RTG. At least the moderate stake for a player that wants to experience everything possible when playing the game should be five dollars for one spin.

Return to Player and Icons

Real Time Gaming is famous for putting more efforts into making slots game. Therefore, the kind of slot that players expect from them must be a topnotch one in which they did not disappoint. There are increments in the icons to eight by four, and the wheels also undergo these changes. The maximum amount a player can realize from the jackpot session is eight hundred times their bet. This is not high enough for players that love staking high money, but for players that prefer staking less, it is a good one for them. It has a low variability since the maximum amount to go away with is eight hundred times the amount staked. The return to player is approximately ninety-six per cent, and there is also the availability of free spins. There are low cashouts, and according to the return to player, there is a high probability of landing a win. There are a lot of icons available on the wheel, and it includes wilds, scatters, diamonds, dancer, tequila bottle, and so on. To initiate the free spins session, you are going to need to land scatter icons. Also, there is a demo version available for new players to perfect their skills before they play the game with real money.

The wilds icon can replace any other icons on the wheels, and they can also function as a scatter. These icons form the winning combination by landing on wheel one. You can learn more about this bonus by checking more reviews on our site.

The free spin session will be initiated by the presence of 3 scatter icons landing at any place on the wheels. The player will be given six spins freely. However, the scatters are not the only icons effective during the free spin session. Diamond icon also has its function during this session. It is responsible for reinitiating the free spin feature. Therefore, a player should endeavour to accumulate the diamonds until they have covered the screen. Once the appearance of the diamonds has been noted in the 4 edges of the wheels, a sixth wheel will showcase. This will lead to the possibility of obtaining eight by four wheel. Players will be awarded extra 6 spins freely once there is the appearance of 3 scatters. Therefore, there are no limits to the number of times you can initiate the free spin session.

There would be nothing special about Diamond Fiesta slot if you played Mariachi 5 before because they copied almost everything. This does not look too well as Real Time Gaming is highly reputable for creating quality games. Although the game graphics and designs are amazing but creating another game that looks exactly like a former one does not sounds appealing to players. However, if you have not played Mariachi 5 before, then diamond fiesta is definitely a good slot game for you. There is a potentiality of winning up to eight hundred times the amount you staked. It also has a good payout percentage and amazing bonus offer. If you are a theme love, then there is nothing stopping you from playing this game from Real Time Gaming. There are other games developed by Real Time Gaming that you can also check out.