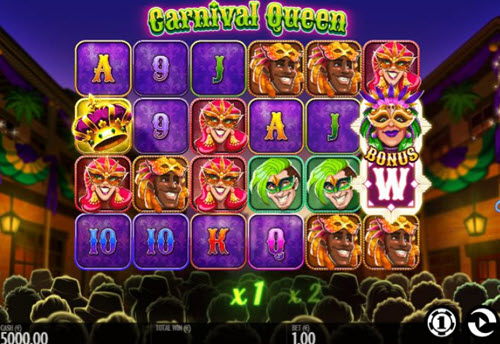 Carnival season is a well-observed event in many nations throughout the globe. Partygoers use colorful costumes and masks to dance the days away from Rio to Berlin and New Orleans. We disclose a parade of fascinating features in our Carnival Queen slot review, which unmasks this Thunderkick title.

Our Carnival Queen testers discovered an Avalanche feature, progressive multipliers, a bonus game with an infinite number of retriggers, and wins of up to 22,700 times your stake among the highlights.

For a complete report on the Carnival Queen slot, read our evaluation.

It is Party Time Activate the Carnival Queen slot for a vibrant EDM party. The remaining visuals are more connected with an EDM music festival taking place on the streets of New Orleans, while the pay symbols mimic traditional party costumes and characters. In the bonus round, the song becomes even more upbeat as the crowd and people transform into frightening skeletons.

Even the pay symbols in the Carnival Queen slot game are designed to be a riot of color. From single symbols to fully stacked symbols, they can all emerge. The typical card suits 9 through A are first, followed by other people dressed in various colorful clothes. The crown of King Carnival and the slot's wild, which is represented by a dazzling ‘W,' are the highest-paying symbols. The wild substitutes for all other symbols and also adds a twist to the free spins. The scatter symbol in the slot game is an image of the Carnival Queen with the word “BONUS” carved beneath it.

Your Carnival Numbers and Stats

The Carnival Queen video slot, which has a 4×6 reel and 4,096 ways to win, pays out from left to right when adjacent matching symbols appear on the reels. From 0.10 to 100 coins, you may join the party on mobile or desktop. To win 1x to 20x your investment, get six of a kind across the reels.

The Carnival Queen slot machine includes two separate features: an avalanche symbol and increasing win multiplier in the regular game, as well as free spins that can significantly increase earnings.

The Avalanche feature of the slot game keeps revealing winning combinations in a continuous flow of pay symbols, giving you a chance to bank some cash. Another appealing element of the Carnival Queen slot machine is the progressive multiplier, which increases by 1 time with each winning avalanche until no more winning combinations remain. This multiplier feature is initiated during an Avalanche spin, and after the avalanche ceases, the feature resets to times 1.

In our Carnival Queen slot review, we discovered that this game offers a free spins bonanza to players. When you obtain 3 to 6 scatters, you get a total of 12 to 24 free spins, with an unlimited opportunity to get 3 to 15 more free spins if 2 to 6 scatters appear during a free spin.

Thunderkick has included a handful of kickers, as is customary, that could get the party started. A multiplier earned during the triggering spin will carry over to the bonus round and will not be reset if you lose in the Avalanche feature. This means that when you score more winning combinations, you can keep adding multipliers to your total.

Another game-changing feature could be a game-changer. When the avalanche round hits a lost combination, the wilds will explode to clear other symbols, allowing new winning combinations to appear.

If you're unfamiliar with Thunderkick Games, you may learn more about their games by clicking on the links below.

Attempt Games With Pay Mechanics That Are Similar

Avalanching symbols and progressive win multipliers were originally introduced by NetEnt when they published their spectacular Gonzo's Quest game, according to our review team of the Carnival Queen slot. When Big Time Gaming developed the Bonanza slot game, the features became even more interesting because the concept contained variable win ways of up to 117,649.

Is the Carnival Queen slot's party one that should not be missed? Yes, according to our evaluation team, because the game is quite enjoyable and has a lot of possibilities for winning. The best thing is that the features and pay mechanics in both the regular game and the free spins round could result in massive payouts on every spin. Are you all set for your carnival bash?

You may play the Carnival Queen slot for free here, or you can play for real money at one of the casinos listed below.