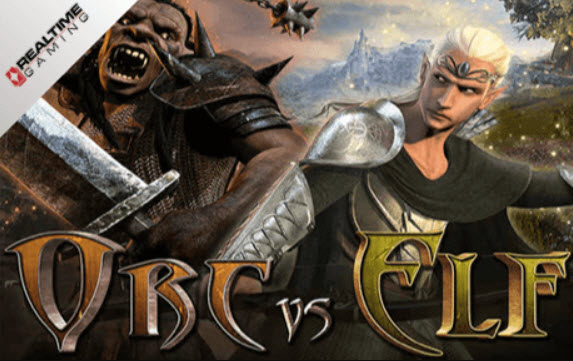 >Play on Orc Vs Elf Slot

This game is one with fantastic themes that take you back to the fantasy world of slots such as The Lord of the Ring Slot.

If you happen to be a lover if this slot and also Dungeons and Dragons Slot, then Orc Vs Elf is one game you would definitely love to try out. The game comes in 5 reels and 25 pay-lines and was created based on some mythical creatures that have been a major part of fictional stories with fantasy based themes.

The fun part of this game is the fact that players will now get to see these two creatures taking on each other in a battle. With this game, several objects appear on your game reels in form of symbols. They include skulls, battle flags, wolves, potions, crossbow, unicorns, orc shield and flower shaped broaches.

Each of these symbols becomes animated once it becomes a part of the winning combination, this helps to give more life to the 3D graphics. It also helps the reels to remain vibrant all through the game.

One thing that stands about this game is the fact that you just have to pick whose side you are on; Orc or Elf. Whichever of these two you decide to choose goes a long way in determining your wins.

A Battle for Prizes

The Battle Bonus is one major feature of this game, it gets triggered once you are able to hit three Bonus symbols through the 2nd, 3rd, and 4th reels. When this is done, you get to witness these two champs battle on your game screen. The moment your chosen character wins the battle; you win a pay out too.

The bonus feature of this game can be triggered by the Orc and Elf shields. Each set of Scatters is able to trigger one out of the seven bonus features available. It all depends on what part you decide to follow. You have two options which are the Trail of Orcholome and the Road to Elveros.

This part comes with seven features which are

Choosing to follow this path provides you with one of seven bonuses which are:

Orc vs Elf is indeed a game changer for Real Time Gaming as it comes with one of the best graphics any slot released from them has ever had. Although it comes with a lot of bonuses, one thing that lets it down is the fact that its pay outs are not as big and they also do not come regularly.